Could you indicate the actual full log variables you are looking at ? I will try to look at this myself this week if I have time.

My quad can take off straight up and there is no yaw drifting, just that during mid flight the yaw reading changes with the quad's heading remains the same, thats when the swapping of roll n pitch control happens.

Hi, my apologies but I would need to check this out next week. Currently I don't have access to the LPS system since I'm working from home. But bear in mind that I will only be able to test this out on a crazyflie since I don't have the same quad setup as you, so it might be hard to figure out exactly what is going on.

Do you have a picture of your quad, with a close up how the placement of the lps deck is done? Also make it face the positive x directly, (this can be checked by the lps tab or the stateestimate.x/y/z log plotter.
Top

May i know if there is yaw PID for position mode? Want to try to tune the value to see if it helps my current situation. 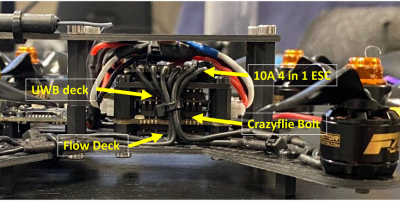 So I was able to test it out with a crazyflie 2.1 with a flowdeck and LPS deck in TDOA3. I tried two assist modes
Just about a command you had earlier: The yaw target is done for deg/s, so it does not aim to get it back to 0 deg but to 0 deg/s which is any angle as long as the turning velocity is zero. Ofcourse, if the estimate is not that great it will drift (which is accelerated when you turn the quad a lot). This is then a yaw estimate purely estimated by the gyroscopes rotation rate integrated to absolute angle (since you are not using mocap or lighthouse positioning(, and this is not estimated by the magnetometer (this works poorly indoors).

You would need to study how the gyroscope and the state estimate behaves, since the state filter might need some updating for your quad, for which the plotter tab is much more handier for you then the flighttab visualization. Here is the cfclient api guide: https://www.bitcraze.io/documentation/r ... de_client/

About your last question, yes there is a PID for yaw and you can find it in this file in the firmware: https://github.com/bitcraze/crazyflie-f ... ntroller.c. The values can be adjusted in the parameter tab in cfclient (pid_attitude and pid_rate), but remember that the estimator also has something to do with the whole stabilization loop, which can be found here (kalman.mnGyro_yaw). See documentation for the stabilizer module (sensors to motors) here.
Top
Post Reply
15 posts