The title of this thread has been changed to reflect the actual problem, which was that the lighthouses were mounted upside down. (ie hanigng down from the ceiling)

I am trying to troubleshoot the use of motion commander py scripts with the lighthouse system.

I have...
- obtained calibration data and hard coded it into lighthouse_core.c
- flashed the firmware using the following line in the config.mk file (which sits in tools/make)
CFLAGS += -DDISABLE_LIGHTHOUSE_DRIVER=0
- obtained the geometry data, checked to see if twas reasonable and written it to ram using get_bs_geometry.py --write
- observed the raw angles x and y from both lighthouses, moving around on the plotter tab (as kimberly did in the recent Spiral Swarm Demo) whilst moving the CF around with my hands.

but when i go to run any of the follwoing...
-- autonomous_sequence.py -> the drone lifts then immediately flips out
-- initial_position.py, sbs_motion_commander or position_commander_demo.py -> the drone lifts but travels aggressively backwards and crashes into the celing
-- autonomous_sequence -> sometimes, straight up into the ceiling, somtimes flips....

i have tried
- flying the drone with he controller, does not feel any different to when the deck is not on the board.
- as soon as i hit the trigger for position or alititude hold, it flips out.

But just wanted to make sureI am not missing anything for now..

Should these scripts run as they are?
Last edited by cafeciaojoe on Wed Dec 16, 2020 12:46 am, edited 1 time in total.
PhD Student
RMIT University
School of Design
http://www.cafeciaojoe.com

First of all it would be good to hold the crazyflie in your hand and move it around while observing the state estimate's position in the plotter before doing any flight. That is also what I showed in the tutorial and if this is not correct you shouldn't try flying yet before that is fixed.

Maybe it would be good to force the firmware to only recognize lighthouse 1 sweepangles:

Also be aware that we are doing a lot of changes lately in the firmware to make more things ready for lighthouse v2. It might be saver to use the latest releases on all software and firmware, which should be 2020.09, to make sure that you are not hitting any bleeding edge bugs.
Top

Hi,
I don't know if this helps you, but when you checked the geometry data, did you make sure that the axes were not flipped? Coz sometimes I notice that happening to me.
Top 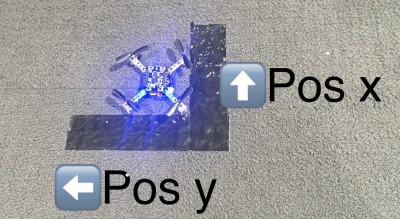 before i did anything, I placed the drone on the floor got the geo data, flashed the drone, ran the client and screenshot the state estimator. all looks reasonable when I start the client.

lifting the drone in the air is a major problem, the state estimator thinkis it is -1.2m

This flipping can happen sometimes since the estimation is prone to flip ambiguity so we do have a note in the documentation to always double check this.

Try the geometry script again and check the output if it makes sense. If it does, put those values in the basestation geometry in your crazyflie.
Top

The geometry data is consistantly coming in inverted in the X and Y axis. I think i have run that script at least 100 times since flagging this flippig issue.

thanks for your patience!
PhD Student
RMIT University
School of Design
http://www.cafeciaojoe.com

So the Lighthouses were mounted upside down (ie hanging down from the ceiling). In the past this has not been a problem because I was running the drones through the HTC software.

Thanks again for all of your help.
PhD Student
RMIT University
School of Design
http://www.cafeciaojoe.com

Ah yeah, that is also a possible explanation.

Technically it should be able to handle that but good to know that it doesnt. Happy you were able to find the problem
Top
Post Reply
8 posts • Page 1 of 1