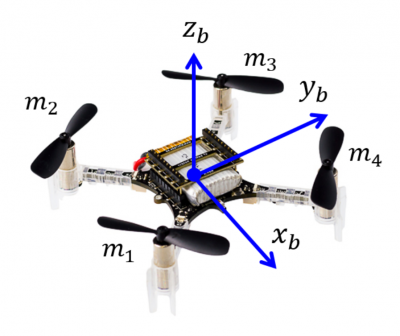 Similarly, I had also assumed that positive roll, pitch and yaw rotations were given by counter-clockwise rotations about the x, y and z axes respectively. However, after looking at some parts of the controller code, and how the final motor mixing is done, it seems that this is not the case. An example is the mixing of the pitch commands, in the powerDistribution() function, which indicates that a positive pitching moment causes the quadrotor to pitch its nose upwards. However, this is opposite to that assumed by the right-hand coordinate system given in the image above, which would have a positive pitch rotation being counter-clockwise about the y-axis, causing the Crazyflie to pitch its nose downwards. As such, it seems like there are two possibilities for how the Crazyflie's body frame is aligned:

Instead of scratching my head for hours and working off potentially incorrect assumptions, I wanted to ask where I could find a document or online link that explains the Crazyflie's coordinate system in more detail. This would make development a lot easier, and would limit erroneous code due to incorrect coordinate system assumptions being made. Any help would be appreciated, thanks!

by kimberly
You are absolutely right. The pitch rotation only is left hand thumb rule while the rest is right-hand.

Why... I guess the ones that originally implemented this can answer that one. All I can say that the crazyflie was not designed in the regular aerosp conventions but more of what seemed logical, which can seem not logical for those who are used to something different (myself included). My guess is that the East North Down coordinate system seemed more logical, which required the pitch to be negative when going up according to the right-thumb rule, which is maybe not intuitive in terms of controlling the crazyflie manually...

Anyway, I made this page on the website since you are right that it should be there somewhere (The LPS tutorial only shows the global coordinate system) 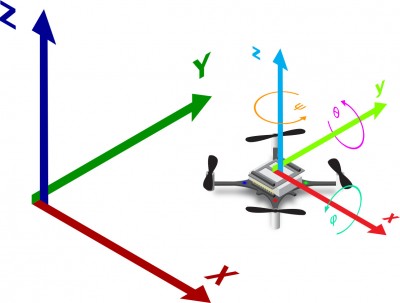 by asr
Thanks Kimberly, this clears up a lot of things!
All times are UTC
Page 1 of 1