The double motor configuration is complete. 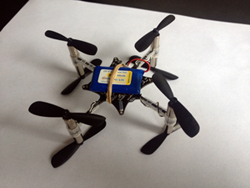 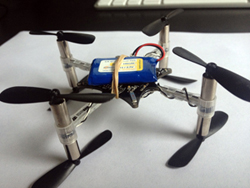 Battery:
I swapped out the stock CF battery (170mAh 6 grams) with a 240mAh 7 gram battery for more flight time. The connector on the new battery is different, but you can use the connector from your stock battery, described in this post.

Conclusions so far
- Double motor modification gets you an extra 5-10 grams over the max payload weight of single motors, but flight time decreases 1-2 minutes.
- A great option for payloads above the single-motor max lifting capability (above 10g) but flight time decreases significantly.
- Decrease in flight time can be offset with a larger battery, but only with diminishing returns due to the extra weight
- The extra weight on the bottom lowers the center of gravity, making it slightly less stable--not great for agressive flying/quick turns

That looks awesome! It's a great alternative if you are interested in carrying more payload.

Did you try flying it in a larger area? How is the acceleration when you push full thrust?

A tip for the landing gear. I found some tooth picks at home, cut them in half and inserted them into the extra holes on the PCB (sharp end first). The ones I have look like standard toothpicks and I think they would give enough clearance for the motor/propeller at the bottom. 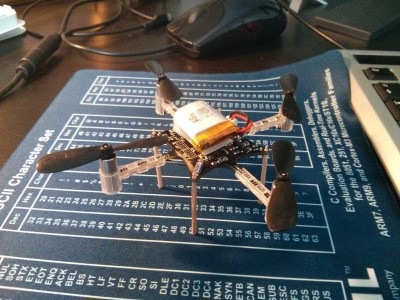 Thanks for the toothpick trick, marcus! The toothpicks I have at home are round and the pointed ends fit through the holes, but they keep falling out. I might have to hot-glue them in place. For now, the CD-ROM spool and catch method works okay.

I haven't tried flying in a larger area, but the added thrust definitely makes the climb rate much more sensitive. Just a little stick deflection and the CF shoots up toward the ceiling. I've never pushed full thrust without at least 10 grams worth of coins on the CF. I'll have to try full thrust without any payload when I'm outside. I"m pretty sure it would climb out of range very quickly. I assume with the right bank limits set (40-50 degrees), the stronger thrust of the double-motor configuration would also mean greater acceleration/top speed, when flown in a larger area.

Definitely worth trying for yourself.

I really had to try this myself, so I assembled a new Crazyflie with dual-motors. It's actually really fun to fly

It feels like the Crazyflie is a lot bigger all of a sudden, but it feels more powerful. I haven't had a chance to go outside and try it yet though. I used the toothpicks as landing gear but they don't really hold up for a rough landing. Also I hit the wall once and one of the motors slid out of the mount and twisted itself around the motor wires. 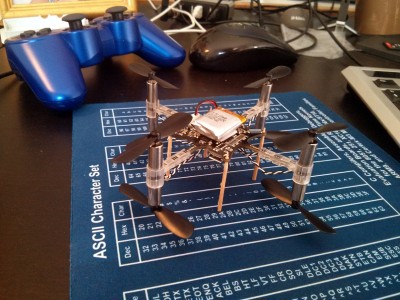 So the conclusion is that I need some good landing gear and probably to attach the motors so they don't slide out. I want to use hotglue for the motors, but if I need to exchange one of the motors I don't think I'll be able to...
Top

marcus wrote:So the conclusion is that I need some good landing gear and probably to attach the motors so they don't slide out. I want to use hotglue for the motors, but if I need to exchange one of the motors I don't think I'll be able to...

Maybe you can solder two motors with a stiff wire like this: 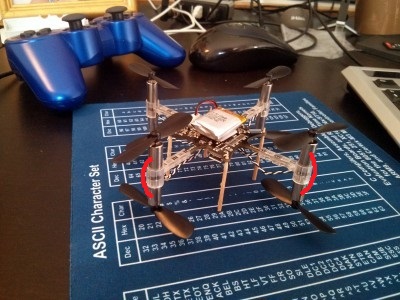 And for the landing gear are soldered stiff wires maybe a solution, too. (like the Training wheel)

Is it possible to use two batteries on the CF with double motors!?
Maybe with a second battery socket on the back or with two stiff wires instead of the battery socket, so you can plug a battery from both side of the PCB. (with attention on the polarity

Thanks for the tip. I'll try to cut a circular pad of the sticky white tape that's used to attach the battery and try to stick the motors together that way. I think they will hold enough for a crash but still it's possible to pull them apart without causing damage if you need to exchange one of the motors.

Unfortunately the wire used for the protective frame is at Tobias house and he's on vacation, but I'll try to find something else. A 3D printer would have been handy to have now.

I think that connecting two batteries in parallel would work for running, but I'm not sure for charging.
Top

Battery
I'm flying my double motor CF now with a 600mAh battery:
Weight - 13g
Flight time - 10 minutes at hover w/ 82% thrust
Motors are warm but not hot after 10 minutes of flying
Can probably support 1-3 extra grams of payload for a camera, when allowed to fly over 80% throttle.
Controls are a bit sluggish due to the extra weight & momentum, but it's still quite controllable.

Landing Gear
Landing gear adds weight and requires too much effort to install and maintain. I still stick to my CD-ROM spool as a takeoff platform and it works fine. (See pic below). When the low-battery light comes on, I hover close to the ground or just land before the battery dies. I can also catch it in my hands. This method saves on weight. 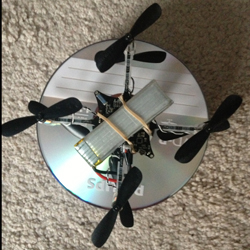 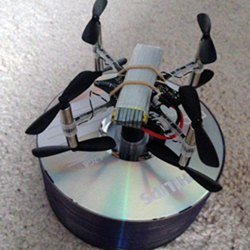 Attaching Motors
Consider leaving the motors unattached/unglued. Whenever I crash (which is alot) I'm thankful that the motors can absorb the shock and pop off. If they were fixed to the frame, the stress of the crash would be transferred to the PCB instead of the motors/mounts and I'd hate to break off an arm or damage the circuitry/battery connector somehow. Anyway, just a thought...

Next step is to get an FPV setup going with my new battery. Check out SuperRoach's thread. He's had some luck with an FPV Hobby setup.
Top

I have also 4 motors to my existing Crazyflie. The sound is quite impressing but... it is now very unstable and i can only fly for max. 1-2 minutes (it feels like 1 minute, compared to the normal crazyflie) until the battery cuts off. The acceleration is also not the best, it is slow. It can hold now a little bit more of payload, i did not test this.
Maybe the PID settings have to be changed in order to get a more stable Crazyflie with 4+4 Motors.

I have soldered two 170mAh batteries together and they are charging @ the moment. Hopefully i can fly about the double time (:
I have also ordered a 600mAh LiPo 20C (that is really enough

) battery, but not arrived yet.

To hold the double motors together i soldered a short wire onto them. This is easy but attention, this will be really hot for the motors, blow as hard as you can to cool down them

Please be carefull when pairing batteries on your own as they can explode and/or die prematurely.
My electronics blog: http://karman.cc
Top
Post Reply
48 posts