In order to put a micro camera/transmitter on my CF, I'll need extra SWaP (size, weight, and power). This will require more thrust and consume more battery power. I thought about doubling up the motors using the existing motor mounts (see pics) and using some of the extra payload capacity for a larger battery to compensate for the increased power requirements. 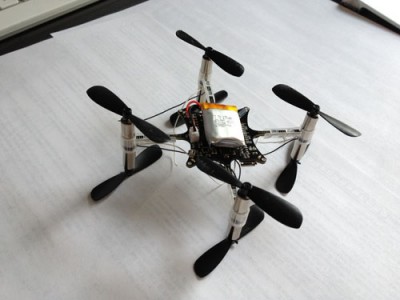 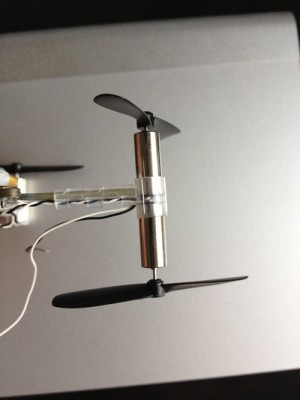 Wiring the motors:
Both propellers on each arm must be spinning in the same direction. Because the underside motors will be upside down, they must actually spin in the opposite direction as the right-side up motors so that when they're upside down, the propellers of both motors are spinning in the same direction. Therefore, for each arm, the black wire of the original motor must be twisted & soldered in parallel to the white wire of the new (underside motor) and both soldered back into the same power port that the original black motor wire was soldered into. Do the same for the white wire of the original motor with the black wire of the new motor. Repeat for each arm and wrap the wires loosely around the arm.

Connecting the motors in parallel means the second set of motors will be regulated equally by the stability chipset and consume/produce the same electrical/thrust power. Here's what I've put together from various other posts and some deductive reasoning.

Launch and recovery:
Use the center peg of a spool of CD-ROMs as a launch platform. The peg keeps the bottom props lifted off the ground, while allowing enough clearance for them to spin. Land the CF softly on carpet for catch it in your hand. Because the motors are loosely slid into the mounts, they may fall off during a rough landing, but are easily put pack in their mounts. 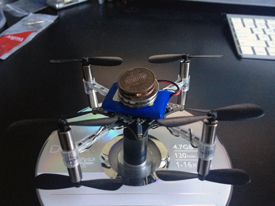 This photo shows the completed modification on a CD-ROM peg with a few coins attached on top as a test payload.

Calculations assume 10% loss of thrust due to prop turbulence. Anyone have experience with dual prop multi-coptors? Any thoughts on what actual power loss might be?

This is going to be really interesting to follow. The efficiency of the motors will probably get better, which might cancel out the turbulence loss.

You might want to increase the strengt of the PCB arms due to the new weight. Tying a fishing line like this might be enough, or tie it around the end of the motor mounts.
Top

Yes, this is really interesting! Then we can add a gps module and/or a camera module without any flight time loss.
Then we have a Crazyflie+

Are there any hardware modifications needed (~double current because of 2 motors each arm)? Does the software also need a modification or is the effect the same as for 1 motor (the controll system)?
Maybe the PID is changed because of more weight/power.

It will also be interesting to add a longer range module with CF+, (gps+longrange) -> much more powerful.
Top

I don't think there needs to be any additional hardware modifications. The board should be able to handle the added current. It could probably be tuned better so looking at the PID settings might be a good idea.

To increase the uplink range, it is possible to put an amplifier between the Crazyradio and the antenna, but the downlink is more difficult to adjust. Switching to a better antenna is the only simple solution there.
Top

Yes i overread that one path can handle about 15W, two motors only need 10W.

I want to increase the range to fly outside a wider area. I did not find a better antenna, does anyone have found one?
One with 10dBi ore similar?
Top

Is this the same connector as on the crazyflie? RP-SMA?
Top

Unless I'm utterly mistaken, yes. Regular SMA has the thread on the inside of the connector (outside of the antenna), reverse polarity is just the other way round.

The e-sky transmitter has an in-built amplifier which should give a very good range, and since it is only an up-link it boosts it even more. We have not tested the range but I would expect it to be several hundred meters.
Top

I flew with the esky already a few times outsite (whcih si increadibly fun after tweaking the parameters to be more dynamic). I also did not tested the range yet but flying until you can hardly see the cf any more was no problem