After seeing the FPV video with a CF2 from http://www.LaDroneShop.com (https://www.youtube.com/watch?v=0wzpcRnsgD8) I just had to try it out myself and finally spend some money on this.

Here is the shopping list: Total amount was 268,81 Euro including shipping (France to Germany).

The camera is the same as in the YouTube video. They used a different transmitter though (http://ladroneshop.com/en/1593-tx5810-1 ... itter.html) which is
pretty similar to the one I got and costs almost the same (51,50 Euro). In the video they used a 7" FPV monitor with two antennas (Diversity), which is not really necessary.
For me, the ability to record video was more important than a big screen. The 7" monitor was not in stock anyway.

Assembly:
Unfortunately the CF1 battery can not be hooked up to the transmitter directly because they have different connectors (CF1 battery: "Micro JST" or JST-ZH, Transmitter: "Nano JST" or JST-SH). So I had to do some soldering and used different cables.
I also had to solder some plugs to the cable that connects the camera with the transmitter.
There is still a lot of extra cable, that I will eventually cut off to save weight.
For the first few flights I just used sticky tape to attach everything to the CF2. The extra battery is on the bottom. I'll clean it up later on.

Why Do I use an extra battery instead of using the CF2's own battery?
Because I'm lazy and wanted to avoid issues with interferences from the motors.

The CF2 also has enough power to lift the weight.
How Do I charge the extra battery?
Currently I'm using a CF1 as a charger.

Now for the interesting part:
Does it fly? Yes

How long does it fly? About 4:30min
Weight with the FPV stuff? 46g in total
How long does the camera and the transmitter work on one charge? About 35min!

I'll upload a video some time soon. For now here is picture of the beta-"sticky-tape" version: 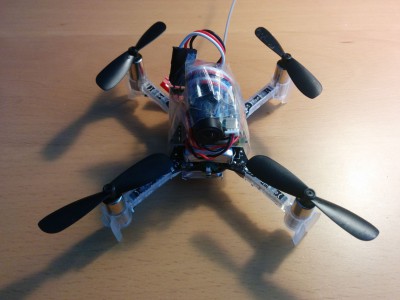 You finally got to it, nicely done!

(with some minor technical issues to solve such as latency...)
Top

What is the difference between the transmitter you picked out and the one that La Drone Shop used on their YouTube video?
Top

Theirs has a clover leaf shaped antenna, adjustable output power and is a bit lighter (1.9 instead of 4 gr, according to the specs).
It was on backorder when I placed the order, that's why I went with the other transmitter. Both transmitters will do the job.
Top

Would it be possible to set this up with FPV goggles?
Top

This is what the current setup looks like (no more sticky tape):