When the CrazyFlie is turned on it syncs with all the nodes (and the leds are blinking for some seconds). I can also see the nodes as green in the CF client (see the image). 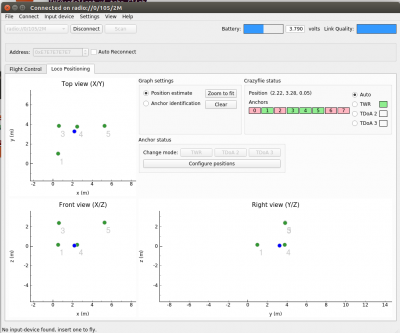 However, I can't configure the node positions and I can't change TWD to TDOA2 or TDOA3. Nothing happens when I try.

I think that the issue is that after the sync between the CF and the nodes, the Loco Positioning deck leds stops blinking, as it is shut off. That is, no more packets are send or received on the LP deck. The nodes themselves keep blinking however (POWER is constantly blue, RX is blinking green, and MODE is constant orange).

Has anyone encountered this issue?