Wan't to discuss something that's relevant but has no forum, this is the place
Post Reply
6 posts • Page 1 of 1

So I saved up and finally ordered my Crazyflie I also ordered some spare parts because i'm sure I'm not the best pilot, so the package arrived today and when I opened it there was all the spare parts but no Crazyflie !@#$ so I posting this hoping that although I only got one order number from seeed studio that maybe they shipped it in a separate package for some reason? I know in the past I have had orders that where split but they mark the package 1 of 2 or something like that.

Has any one else had issues like this? I am so !@#$ pissed right now I didn't have the money to buy the first one so there is know way I can get another one, PLEASE tell me I am wrong and this is normal and its still in the mail ?????? 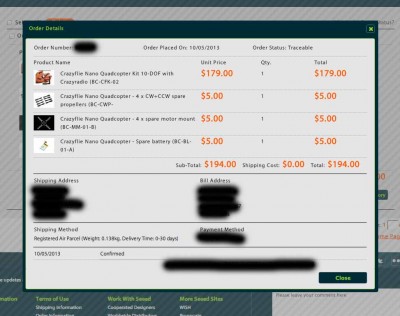 That really sucks! Have you got in touch with Seeedstudio support yet? They'll be able to say for sure if the Flie was shipped with the spare parts and if it was but didn't arrive they should organise another to be sent out to you. They'll then claim insurance from the shipping company for losing the package so you don't have to.

Given that the 10-DOF model with the radio is now listed as out-of-stock, my suspicion is that you managed order one of the last few but when it came time for your order to be shipped, there weren't enough or some had been damaged. This has happened to me before - I ordered three things from an online store (spare parts for work) and when one didn't arrive, was told that I'd ordered the last that was in stock and they found out it was broken when they went to ship it. I ended up getting a refund in that case, so it all worked out.

I bought this site twice and have had no problem ... really was to come with your purchase, you must have had some error ... contact stating that they should give you some feedback ... I'm from Brazil and everything went smoothly .. good luck!
Top

Hey sorry to reply late, I didn't notice that people had responded, Thanks so much for all the concern.

I did contact Seeed and they replied quickly it turns out if your in the US they ship some of there products from a different warehouse, because I ordered the extra parts they shipped first, why they got delivered first from across mass water and three day sleepover at customs is a bit odd but whatever.

So any way I got my flie and having fun, FYI there was only one tracking number on my package when the first package was delivered all the tracking services marked it delivered, I had email alerts set up so I got the same delivery notice twice, I feel they could have made them separate and maybe clearly mark the packages 1 of 2 to avoid a panic attack but none the less I hope this helps anyone else down the road that runs into this.
Top

Re: Seeed Studio shipping issue - happy ending for me

I purchased the Crazyflie 2.0 on pre-order (and additional boards, etc).

None of SeeedStudion tracking numbers worked. Saturday 12/27, I received a "sign-for" package from some unknown party. Inside was my Crazyflie 2.0 and the following handwritten note:

Wow!! No doubt. Thanks Brian.

Return to “Off topic”