I tried the Neopixel ring mod for the CF1 about a year ago, but couldn't figure out how to get the driver to work before another use for the NP Ring compelled me to remove it... Recently however, I've found myself with a similar component that seemed like an even better fit for the CF. Available on Amazon (http://www.amazon.com/NeoPixel-Rainbow- ... B00UJAWVU8) as the "NeoPixel Biscuit", it is actually not an official "Neopixel" product as it is not sold by Adafruit. Furthermore, the description which reads-

Anyway... The square 3x3 matrix form actually fits the CF perfectly! As you can see in this photo- 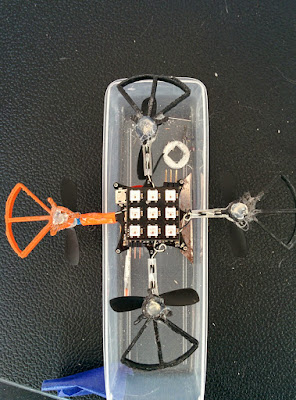 The matrix form would allow for all kinds of basic shapes and/or indication lights such as a directional arrow or even a color responsive balancer.
The problem is that even though it has fewer pixels than the 12 pixel ring, the Amazon page lists the weight at 0.2 ounces. While my metric conversion ability is admittedly lacking, I believe that converts to roughly 5.6 grams? I have read that the CF1 would have trouble with a payload of anything over 4 grams... Is this correct? Is there anyway to either increase the payload capacity or create a 3x3 LED matrix that weighs less? Has anybody else attempted other Neopixel/CF1 combinations other than the ring?